We’ve all had the three R’s drilled into our minds since middle school: reduce, reuse and recycle. But somewhere down the line, this concept gets lost. It is necessary to remember how much an act as small as throwing a plastic water bottle into the correct garbage bin impacts our environment.

As a whole, recycling tackles the reduction of pollution which helps keep both the air we breathe and the water we drink clean. Recycling also helps conserve energy which fights against climate change, not to mention how much money you can save from donating or reusing old clothes or material, bringing bottles back to a local grocery store, and other small, quick and easy tasks.

There are five cities across America that make a strong effort to improve the environment by recycling. If each city in the U.S. implements at least one of the strategies that these five recycling superstars utilize, it will make a world of difference…. literally!

There are many aspects that contribute to the greenness of San Francisco including recycling programs, a large scale of composting and high use of solar energy.

This city is America’s leader in the use of green cars and go green initiatives as a whole. In recent years, San Francisco has been harping down on exactly what residents should be recycling and how. For example, if not separating food from newspapers, residents may be fined up to $1,000.

Residents of San Francisco use three color-coded garbage bins to make this recycling process as effortless as possible on all ends: blue for recyclables, green for compost and black for remaining trash.

Over 70% of the estimate 2 million pounds of waste produced yearly in San Francisco is diverted away from landfills and into recycling and composting programs. The city has set a goal of sending absolutely no waste to landfills by the year 2020.

The Green Roof program is the initiative that sets Chicago apart from other green cities. This program constructed more than 300 gardens and green roofs, totaling more than 4 million square feet on both public and private buildings. These efforts conserve water, filter rainwater and improve energy efficiency. Additionally, Chicago had planted approximately half a million trees in recent years to add to the thousands of acres of parkland across the city.

The Chicago Recycling Coalition believes in the effectiveness of recycling and living in a healthy environment, focusing on: 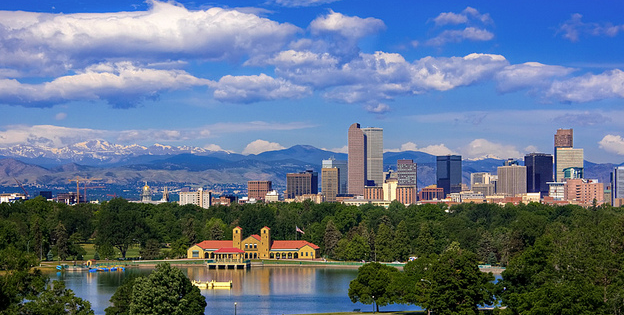 Since the Altogether Recycling plant opened in Denver in 2007, it has reserved a spot for the city as a top recycler in the US. It focuses on recycling paper, glass, plastic, tin, steel and aluminum. Making things easy for the residents of Denver, the facility does not ask for sorted materials, rather asks residents to shift their focus on compiling all recyclable material into one place. The facility itself is then in charge of separating recyclables.

Boston is America’s leader in using renewable compost. Its focus is using plants and wildlife as promotion for green living. site information For example, the city is in the process of utilizing a plant that will use its leaves for reusable energy and fertilizer. This plant will make methane to compost 1.5 megawatt hours of power by using anaerobic bacteria to feed the grass and gather yard clippings.

Being known as “America’s Walking City” also plays a huge role in the eco-friendliness of Boston. It has the highest percentage of commuters who travel on foot, contributing to the reduction of energy that goes into public transportation.

The state of Massachusetts also utilizes a program called Earthworm that promotes recycling in all work places. It is successful by having a collection service that is accessible for first time recyclers, in order to offer assistance.

Founded in 1990, Portland is part of the Total Reclaim Environmental Services. This puts a focus on recycling electronics, like computers, since the use of electronics grows daily. In addition to electronics, Total Reclaim also focuses on the recycling of appliances, fluorescent lamps and refrigerant gases.

7 Items that NEED to be RecycledRecycling, Blog